FOR THE INCOMING STUDENTS: At this link you can find all the useful information about the university and the erasmus program of the university of Verona.

Here is an indicative map of the area in which you should search for accomodation if your classes are in the main structure. 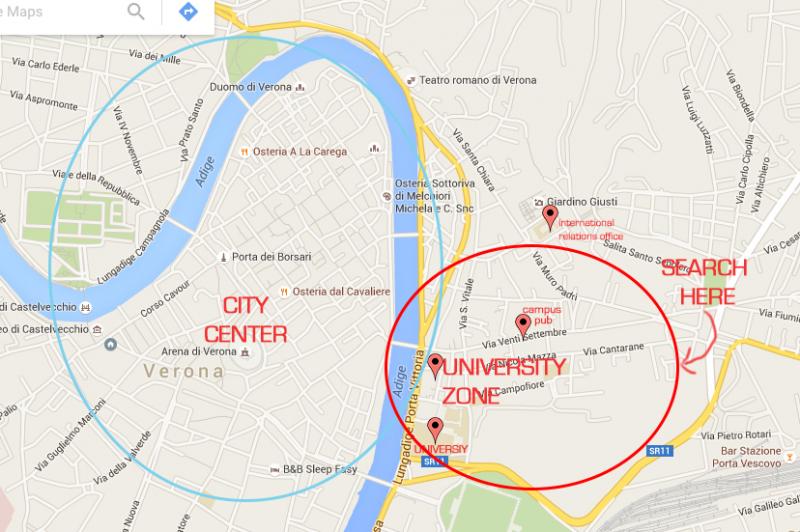 THE UNIVERSITY: The birth of the University of Verona goes back to the Papal bull of 1339, in which Pope Benedict XII confirmed in Verona the general “studium” articulated in the faculty of law, medicine and art. For some historians the Papal bull proofs the recognition of an academic dimension already existing in Verona. However, only after World War II, a group of intellectuals was able to give life to the Free School of Historical Sciences, from which sprang the desire to give birth to the University.

From 1950 to 1960 the Institute of Historical Science “Ludovico Antonio Muratori” was founded and the magazine “Nova Historia” was edited. It was from that group of scholars who sprang the desire to give birth to a University in Verona. The idea finally became concrete in February 1959 when the major of that time Giorgio Zanotto put on the agenda of the session of the council “the establishment in Verona of the faculty of Economics and Business”

Was created the Free Faculty of Economics and Business, the Consortium for University Studies and the seat was set at Palazzo Giuliari, current seat of the dean. The failure to recognize the initiative by the government froze everyone’s expectations and forced the city’s authorities to seek a different solution, which arrived in 1963.

The University of Verona focuses on the innovation and quality of research and teaching: it is an institute made up of 23000 students and 1500 between teachers, researchers and administrative staff. The University consists of 15 departments and the School of Medicine and Surgery for a total of 60 first degree courses, 7 doctorate schools, 26 master’s degrees, 40 postgraduate schools and 16 improvement courses.

A university deeply integrated in the urban context that looks to the future through continuous strengthening of the link between educational provision and the world of work, and set to itself as primary objective for the near future, the realization of structures even more comfortable and appropriate.

Our office timetables vary depending on scheduled activities: you can find all the information about the opening times on our Facebook page!